OK, seriously. What fresh hell is this???

#1 - Michael's whole flashback stuff. Why? What was the point? I thought it was spelled out really clearly last season that 1) he loves his kid, 2) his ex was a raging bitch and 3) eventually she manipulated him into giving up his parental rights so her new hubby could adopt him. So what was the whole frigging point of this flashback? That he gave Walt a stuffed polar bear? Jesus H Christ.

#2 - WASTE OF TIME, folks. All the little bits they re-showed from last week? Why couldn't they have just made the season premiere last week be 2 hours long? Oh, yeah. Because they wanted to have 23 (!!) episodes this season.

#3 - Waiting all damn hour to see Jin. I was getting pretty worried about him, actually. And the tailaways? Not exactly stunning, y'all. Not when it's been spoiled left, right & center.

#4 - Jack is still an unsufferable ass.

But on the plus side:

#1 - Numbers resetting the countdown thingamajig. How much you wanna bet that if Dezzy doesn't reset it in time, Lostzilla starts yanking trees underground?

#2 - Ooooh, what's with the patch? Eagle-eyed TWoP'ers saw the exact same logo ON THE SHARK!!!! WTF????? (I totally missed it, but will re-watch tomorrow.) Must be more of that loverly "island security system." Shark scenes were very tense overall; I liked that bit.

Email ThisBlogThis!Share to TwitterShare to FacebookShare to Pinterest
Labels: tv

Rugrat is such an amazing artist. He just keeps on surprising me. Kid has got some mad skillz! This is one his most recent creations: 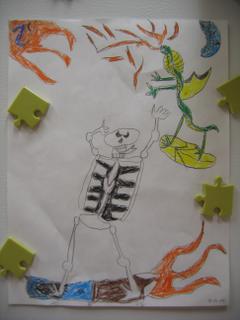 Seriously - check out the gnarly skeleton on the flaming skateboard! I love his expression - the hand position, the forked tongue sticking out...it just rocks. And the angry sun & moon in the upper corners - so cool! Not sure what to make of the flying/boarding dragon/cobra though, LOL.
Posted by Snarkmeister at 11:21 AM No comments:

God, I'm so freakin' tired. I just want to sleeeeeeeep. I have been having serious insomnia the last week or two, and haven't been able to fall asleep until at least 1 or 2 AM. I'm just exhausted, y'all.
Posted by Snarkmeister at 4:39 PM No comments:

My carpet is being installed. Dude, it smells AWFUL. What is that crap they use to glue down the pad? Toxic waste?

Sittin' outside on the patio trying to squint & see my laptop screen. Glare sucks.
Posted by Snarkmeister at 10:57 AM No comments:

OK, how big a dork am I? I am so excited about the Lost season premiere tonight that I am literally bouncing around the house. Yes, I need to finish moving stuff out of the bedrooms before the carpeting guys come tomorrow. Yes, I should be working for the next half hour. But all I can think about is...just a few more hours 'til Lost!!! God, I am SO that show's bitch.

OK, here's my wish list for this season:
Please, God, let it be so.
Posted by Snarkmeister at 5:00 PM No comments:

Email ThisBlogThis!Share to TwitterShare to FacebookShare to Pinterest
Labels: tv

A good friend of mine died last night. I never met him in person, but for the last seven years he's been a part of my life, each and every day. He maintained a bulletin board that I visit almost daily. For seven years, this board has been a constant source of comfort, joy, support, love and hope. When Rugrat had his toothbrush accident, I got cards from people all over the country (and Canada), as well as gifts and prayers and good wishes. Whenever there is a tragedy, the board rallies around and takes care of the person in need. When something wonderful happens, we tell the board, and everyone rejoices with us. Daily frustrations, parenting questions, recipes, television show recaps, movie reviews, high-profile criminal trials, jokes, games, pictures, poems, songs...we share it all. When our "board babies" pass a milestone, everyone marvels at how fast time flies. When politics is the dominant topic of the day we all choose sides and argue - sometimes getting a bit out of hand - but we come back "home" after we've cooled down and taken a breather. In other words...we're friends. We're there for each other. We are a huge "virtual" support network and I am blessed to have found the board. MikeyD made it possible for us to have a place we could come to online, anytime, to find a friend.

RIP, Mike Helton. Your RT HO's will miss you every day. :'-(
Posted by Snarkmeister at 9:41 PM No comments:

Email ThisBlogThis!Share to TwitterShare to FacebookShare to Pinterest
Labels: friends

What the HELL? Why is it taking so damn long to get help to the people down there? It's a disgrace. For four days now, they've been stranded with no food, no water, no electricity, inadequate medical assistance, and ineffective law enforcement. And to top it all off, the weather there is in the mid-90's with high humidity. Can you imagine being outside in 90+ degree heat all day, with 75% humidity, with no water and no possibility of going into a nice air conditioned building? Now imagine that, surrounded by garbage, dead bodies, and crap. Literally, crap. It's disgusting and horrifying.

Bush, get off your ass and get some fucking help down there NOW! We keep hearing that "help is coming" -- but it's been FOUR DAYS. And the help that gets through is woefully inadequate. Not enough troops to restore order. Not enough buses to evacuate people. Not enough food and water and medical help to keep them alive until they CAN be evacuated. People are dropping like flies down there. And the ones that aren't dying of starvation or dehydration or for lack of medical attention are getting raped and shot by roving gangs of thugs, desperate to impose some sense of control on their world. I've been crying for days, hearing about the mess down there.

And New Orleans is probably gone for good. Which is a damn shame, because that was one seriously FUN town. Even if they do rebuild the city, it will never be the same. And I don't think it's a certainty that they will rebuild, considering how much it will cost and the likelihood that a catastrophe like this might happen again. I mean, the whole town is below sea level. If it were me, and I woke up one morning to find my house underwater and I knew that it could easily happen again, and that I'd be stranded for days with no help? I'd move my ass to higher ground, y'all. All the jazz and beignets and bananas foster and lagniappe and beads and hurricanes (the libation, not the natural disaster) in the world wouldn't induce me to live there.

I'm in mourning.
Posted by Snarkmeister at 10:16 AM No comments: